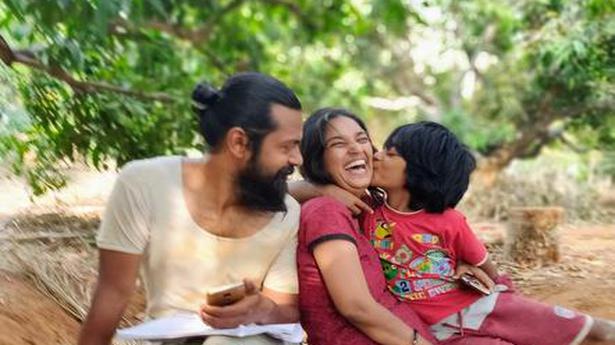 The lockdown was a picnic for these families that moved to farms from the large city: they awoke with the solar, milked cows, toiled in the fields and slept below a starry sky

While the relaxation of the world was protecting monitor of day-to-day COVID-19 instances, Shrekanth RG and his household have been foraging for fruit for breakfast at a farm in Pavunjur close to Chengalpet, Tamil Nadu. The household of three — together with Shrekanth’s spouse Banu and nine-year-old son Aarush who’s being unschooled — have been spending the lockdown between three farms in Chengalpet, Tiruvallur, and Kanchipuram districts. They have been dwelling off farm produce — typically, simply fruit for all three meals of the day.

The household has been travelling for 2 years now, and as Shrekanth places it, are “wanderers who do not have a home”. They have been to a number of reserve forests, cities and cities throughout the nation. But lockdown was particular as a result of they obtained to pitch a tent in the center of a farmland, rise with the solar, eat uncooked meals, and make pals with parakeets and cows.

“We learned survival skills, spent our days and nights amidst wind and rain… it’s like we were animals in a forest,” says Banu. Shrekanth in the meantime, was changing their host’s farm right into a pure meals forest. “We made friends with local farmers, who sold us fresh produce,” explains Shrekanth, including that they discovered some invaluable classes alongside the approach.

“We listened to stories from years ago from the locals,” he says. Such as how, throughout a famine 50 years in the past, individuals in the area relied on the palm tree to feed them by the yr.

The household, too, shared their data with individuals they met. Shrekanth, as an illustration, confirmed some farmers how they may make jam out of mangoes that they may not market on account of lockdown. Their subsequent cease is a farm too: a 300-acre dry patch in Ramanathapuram that they hope to transform to fertile land.

It was a path he at all times needed to take. Thanks to the pandemic, Chennai-based photographer P Panneerselvam made up his thoughts to relocate to his ancestral farmland in Sooradimangalam village, seven kilometres from Kalpakkam. He and his spouse Parvathavarthini Eswaran, an artist, lived in Ekkattuthangal in Chennai throughout pre-pandemic instances. “After the lockdown was announced, we spent 30 days indoors. We do not have a television set at home — we never felt the need for one — so we played indoor games, caught up on news online…we found it difficult to stay cooped up at home. Finally, we decided to pack our bags and move to Sooradimangalam,” explains Panneerselvam.

Financially and career-wise, the transfer didn’t have an effect on them a lot, since each of them are freelancers. But the change from a busy city life to at least one in a quaint village, was dramatic.

“I start my day with cows, and end my day with them,” says the 34-year-old Panneerselvam. His household owns a farmland in the village, on which they develop paddy, ragi, and chillies. There are loads of chickens to are inclined to, and 10 cows. Panneerselvam wakes up at 5 am to wash the cow shed and milk the cows. Then there may be work at the farm; since they need to reduce down on labour prices, Panneerselvam and his father do most of the work.

Parvathavarthini is busy together with her artwork; she typically conducts periods on-line. The neatest thing about the transfer, feels Panneerselvam, is that they get to eat the finest variety of meals.

“Our eggs come from our own chickens, and we know for sure that they are free range,” he provides. “And with all the work I do, I’ve lost all my flab without hitting the gym.”

Then there are different perks of life on a farm. “Our three-month-old calf has taken a special liking for my wife,” laughs Panneerselvam. “It responds to her instantly, but doesn’t bother much if I call for it.”

Vinod Jayaprakash didn’t need his 10-year-old son Kishore spending lockdown glued to a cell phone or laptop computer display screen. The Chennai-based businessman who makes metallic sheets, determined to shift base for 3 months to his one-and-a-half acre farm close to Sriperumbudur. “We moved there along with my friend’s family; they have a 11-year-old daughter,” he explains. Vinod grows apples, oranges, strawberries, papaya, grapes, walnuts, and almonds in the farm. “I would wake up at 5 am every day to water and tend to the plants,” he says. The youngsters would be part of him too. “They even prepared a small patch of land and sowed green gram seeds,” he provides.

They vowed to not use their telephones a lot, and because of this, had loads of time. “We went fishing in a pond nearby; I taught my son to brush his teeth with a neem twig; he played to his heart’s content; ate fruit in place of junk food; bathed in an open water tank…life was good,” says Vinod.

One night time after rains, that they had a customer: a myna chick. She was fairly frazzled. “The kids took good care of her,” says Vinod. “Once she was better, she flew back to her parents.” The fowl taught the youngsters what no on-line class can train.