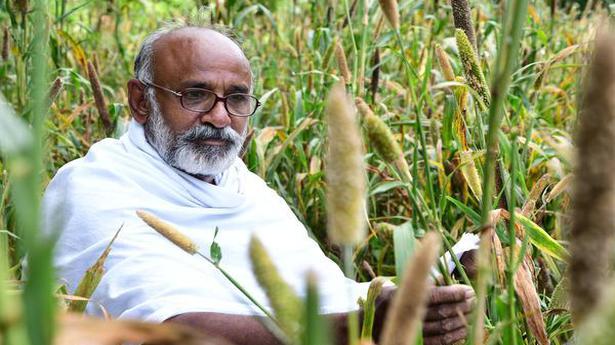 As the solar units, 62-year-old Muthu Murugan, strolls by means of his farm at Thondamuthur in Coimbatore. Slow-paced, he walks, and stops on recognizing a peacock at a distance. “He is a regular. He does not run away at my sight,” he says.

The night stroll has been part of Muthu Murugan’s routine for the previous 4 a long time. “For me, this is the best place on theplanet. I live in harmony with the animals and insects here,” says the farmer.

During the COVID-19 lockdown, he allotted half an acre of his land to domesticate pearl millets and sorghum for the birds to feed on. “I sowed the seeds in April. It took three months for the plants to yield.” Since then, birds have been thronging in massive numbers. “Last week I saw a flock of Munias. They came in hundreds. Sadly, I could not document that moment,” he says. Muthu has additionally noticed pigeons, crows, bats, sparrows, peacocks, parakeets, kingfishers, and squirrels amid the millet area.

And, in case they get thirsty, the birds are additionally welcome to go to the birdbath Muthu has thoughtfully organized. “Many farmers think of birds as a menace. But, I don’t see a problem with sharing what I produce with them.” Muthu sees the animals in his farm as his friends. “I don’t disturb them and watch from a distance. Most of the birds come in early mornings and late evenings,” he says.

The farmer has been cultivating pulses and greens from a younger age. “I have always cultivated them along the boundaries of my farm. But this is the first time that I have exclusively reserved a patch of my land for it,” he explains including that he grows beans, tomatoes, bitter gourd, women’ fingers, and fodder for his cattle on the remainder of his property.

“With farmers switching to cash crops and buildings taking up agricultural land, birds are not able to find food. This has reduced the bird count in our city and I want to bring them back.” He makes use of rain water for irrigation and cow dung as manure for the millets. He additionally stays away from chemical pesticides. “It alters the food chain of the locality as it kills the worms and other insects, that are food for birds and small animals.”

Muthu’s farm is surrounded by bushes that he has planted for the birds to nest. “Some of those trees grew from seeds dropped by birds. These are all small ways of giving back to Nature.”

Wildlife cinematographer Varun Alagar Surendran who visited his farm captured images of the birds. He says, “I could not spot the birds on my first visit. I came back the next day and photographed Ashy prinia, Scaly-breasted munia and White-rumped munia.”

Muthu plans to proceed leaving parts of his land for birds in the longer term. He says, “I hope this will be an inspiration to others. It is heart-warming to hear them chirp.”