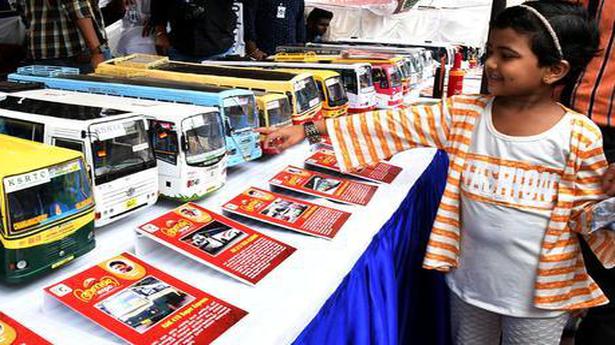 Christy Mathew owns more than 15 automobiles, all constructed by himself, whereas Mathews Naruvenchiyil has his personal Jatayuppara rock sculpture and Eiffel Tower. Bibin Mohan takes delight in his assortment of off-roading automobiles. However, all of them are miniature models.

Christy, Mathews and Bibin are members of Miniature Crafters, a WhatsApp/Facebook group for individuals who make miniatures. MetroPlus caught up with some of the members of the group after they have been within the metropolis in reference to ‘Aanavandi Expo’, an exhibition of mini variations of varied models of the Kerala State Road Transport Corporation (KSRTC) buses. Among the 40-odd displays have been models of classic buses, equivalent to the primary ever bus launched by the Travancore State Transport Department on February 20, 1938 and the tractor-trailer, models of buses not in manufacturing and these which might be at present plying the streets.

Models of buses at ‘Aanavandi Expo’ in Thiruvananthapuram

“There are 122 members in our WhatsApp group and our Facebook page has over 7,800 followers. We have members from various walks of life. All of us are crazy about automobiles. Although we have held exhibitions before, last year we thought about doing something for the KSRTC because it has been a part and parcel of Kerala for several decades now. There are people who share an emotional bond with the public transport system and we have members who are like ‘walking encyclopaedia’ on the KSRTC. We decided to tell the history of the KSRTC through our exhibits,” says Renjith Thomas, a Kochi-based software program engineer who spearheads the group.

Miniature Crafters was “officially launched” on October 2014 after a few like-minded people met on Facebook. “When the movie Ordinary was launched, somebody had posted a mannequin of the KSRTC bus that performs an essential position within the film on Facebook. A seek for the artiste ultimately related me with more such skills. Soon we determined to kind a group,” Renjith says. To turn out to be a member of the discussion board, one has to recurrently put up “good models”. “We don’t entertain members who make models once in a while,” he provides.

“The design of the KSRTC buses vary depending on the route, frequency of service and branding of the buses. For instance buses that only ply in the city might have a different look from one that is used for long distance. Also, since they are manufactured at five depots in Kerala, there might be differences on account of that as well. We fixed the breadth at 16 cm for all models; length and height could vary according to the design,” explains Christy, a medical consultant from Kottayam.

While some members concentrate on luxurious vacationer buses, others are into making models of buildings, well-known constructions, monuments, and devices. The members level out that it takes months to create sure designs as a result of they should take day trip of their jobs to work on the models. “I devote at least three hours a day on one model. Sometimes it takes two to three months to finish one piece,” says Pathanamthitta-based Mathews, an operator of heavy automobiles used for building.

The youngest within the group is Aaron Eapen, a class 9 scholar from Kottayam. “I have enjoyed making miniature models from childhood. When I learnt about the group I immediately contacted them on Facebook. At the ‘Aanavandi Expo’ I exhibited the first KSRTC bus I made — ‘Ordinary service’. Being part of the group is a learning experience,” says Aaron.

Check the web page Miniature Crafters on Facebook for particulars.