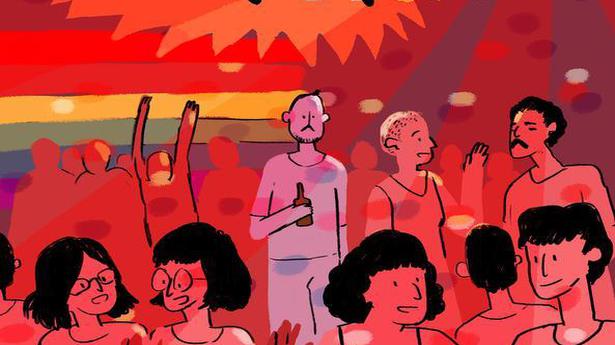 It is Persepolis in color and set in India — Imphal to Mumbai. Sadam Hanjabam has made a quasi-graphic novel of his journey in self-acceptance, from rising out of a mental health disaster to establishing Ya_All , a youth and queer-led and -focussed organisation within the North-eastern area of India.

The illustrations are a part of Mann Mela, certainly one of India’s first digital museums devoted to sharing private, autobiographical tales of mental health, from youth throughout India, within the age group of 18 to 35. “Overcoming my trauma and sharing my experiences on mental health and inclusion have been very overwhelming,” reveals Sadam. Started by Sangath, Mann Mela is a step ahead from its initiative, It’s Ok To Talk, the latter being a weblog of mental health diaries.

“We wanted to capture first-person narratives but by utilising new media formats to talk about it in a much more nuanced way. That means using illustrations, film, interactive videos, VR and so on,” says Pattie Gonsalves, challenge head at It’s Ok To Talk and founding father of Mann Mela.

If Sadam’s story is in an illustrated type, Chandigarh-based Tarini Chawla’s story of being identified with Borderline Personality Disorder, is in calmly animated chapters, voiced by her. Eight others are to affix Sadam and Tarini’s, and launched month-to-month on the Mann Mela web site.

Each story takes three to 4 months to create; the interviews are transcribed, scripts are written, and the video or art work is created. “The person whose story it is, participates as much as possible, whether it is by lending audio or by reviewing and writing parts of the script,” she says.

Well earlier than the launch of this digital museum — earlier than the pandemic struck — Mann Mela was envisioned as a travelling museum that may take the dialog of mental health from metropolis to metropolis. “The online museum was supposed to be more for archiving the artefacts we displayed in the physical spaces, but as things stand right now, we are going digital-first,” says Pattie.

A prototype of the museum, hosted in Goa in February, is a precursor to what the travelling museum will ultimately entail. “We wanted it to be an immersive space, where people can interact with other people’s journeys and feel like they are getting to know the other person better.”

A human library of kinds: corporeal. “For example in the (One Day in the Life Of…) stations, we recreated a section of this person’s bedroom with different objects, and headphones were provided to listen to audio cues, of that individual telling you their story. So it feels like you are with them.”

However, now, when the museum travels once more, issues must be modified. Six folks in a sales space, sharing headphones, touching a display, will probably be out of the query. “Like museums all over, we will have to innovate,” says Pattie.

Underlining the need of relaying private tales of mental health, she says, “People understand those much better than an intellectual sounding PSA [public service announcement]”. Moreover, she provides, that it helps bear in mind the various socio-political realities within the nation. Growing up in a conflict-embattled space, or being of a sure sexual orientation influences mental health in separate methods.

Alongside the tales, in addition they have studying assets, equally illustrated in an easy-to-understand-and-share method in each English and Hindi. “It tells you that if they have recovered, you can too. That kind of solidarity encourages people to seek help,” she says.

But even if you do wish to search assist, is assist available in India — a nation that has far much less scientific psychologists than it has psychiatrists? Perhaps not, “which is why,” says Pattie, “we want to train non-specialists to be able to provide first aid. We want to equip young people with life skills that allow them to help themselves and people around them before they need to leverage external support.”