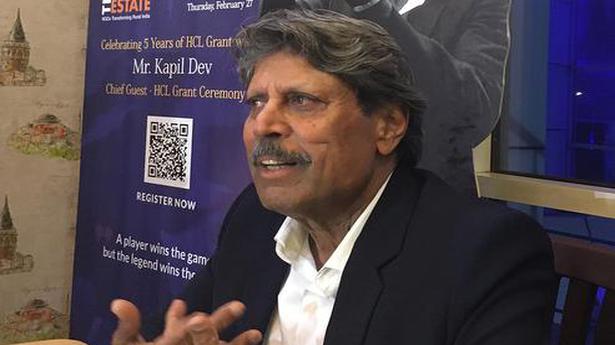 Former India captain Kapil Dev gave credit score to New Zealand for its performance in the first Test at Wellington within the ongoing collection.

“In the last 50 years one thing that New Zealand has shown is big commitment to the game. They may not have big names but they are able to perform consistently,” stated Kapil at an occasion organised by IT large HCL Technologies.

Kapil regaled the viewers with a visit down reminiscence lane. “I never had a plan B because plan B makes you weak. Plan A is always about winning and I am not a weak person.”

Kapil didn’t agree that India may encounter issues on the bouncy pitch at Christchurch. “We have won on bouncy pitches in the past. We have won at Melbourne. We have won at Perth. No one in this team is scared of short pitched bowling. The players are professional, understand the game well and I am sure they will come hard at New Zealand.”

When requested if the gamers face burnout subject, Kapil stated, “if burnout is the issue let them not play IPL. Country will always be more important than club. For me every Test is important. If that was not so let them not talk about statistics. They have to respect the opponent because winning is what counts at any level of cricket.”

India has not gained much from Virat Kohli and Japreet Bumrah to this point within the Test collection. But Kapil was not perturbed. “Bumrah is coming back from injury and will take time to find his rhythm. Virat is a great player and it is rare that he fails consistently. They have both proved and it won’t be long for them to come back. It is a matter of one innings and one spell.”

On M.S. Dhoni’s future, Kapil took a philosophical view. “It will not be just about Dhoni. It will be also about some talented youngsters also. I am big fan of Dhoni. He may be on his last leg but remember that he has done so much for Indian cricket. As a fan I want him there but as a professional he also has not played for a long time now. Performance in IPL is about youngsters coming through for the future of Indian cricket.”

Kapil lauded the Indian girls cricketers for his or her efficiency within the present T20 World Cup in Australia. “They are playing very well and we are all looking up to women’s cricket. Respect to BCCI for providing facilities and opportunities to the girls. They are being handled better than they were 15 years ago.”