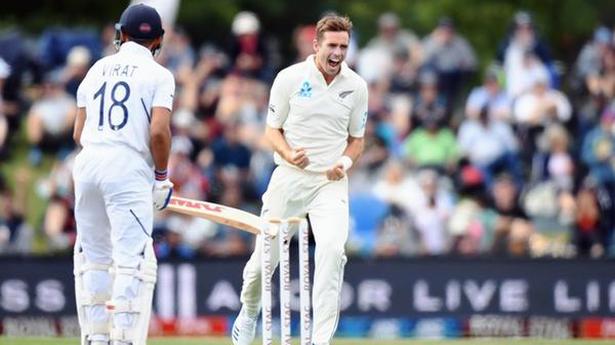 Four wickets within the first innings in Wellington and a five-for on day one right here. After the primary Test Kyle Jamieson had oozed confidence and perception. “I am going to make rapid strides,” he had mentioned.

Jamieson’s arrival on the scene has given the Kiwi tempo assault more firepower. Here was somebody tall who would push the batsmen again along with his top and bounce after which pitch the ball as much as have the batsmen caught on the crease.

Or he may get the ball to seam away with bounce from size. It is this mixture of motion and elevate that makes Jamieson so tough to barter.

After the day’s play, Jamieson spoke more concerning the crew than himself. He mentioned, “I think, the high point [of the day] was how good we were — to take those wickets, restrict the Indians, and being without loss at stumps was massive.”

The beanpole seamer added, “We were clear in our plans, bowled in partnerships. The ball moved around a bit.”

Asked concerning the floor on the Hagley Oval, Jamieson mentioned, “It probably doesn’t do as much as it does in Wellington. It is truer.”

Jamieson felt the Kiwis took wickets at important moments. “The way Tim (Southee) bowled before and after lunch and the breakthrough (Neil) Wagner got before Tea were crucial.”

Queried on the Indian batting, Jamieson mentioned, “They played more shots. The pitch allowed them to as well. They were playing shots off the short ball but looked a bit indecisive there.”

The paceman added, “The way the ball bounced at Wellington, it took a few of their shots out of the game. Here they could play them. So the margin for error became smaller for a bowler.”

Jamieson has quite a bit more left to do within the Test. And he’s acquired an urge for food for wickets.