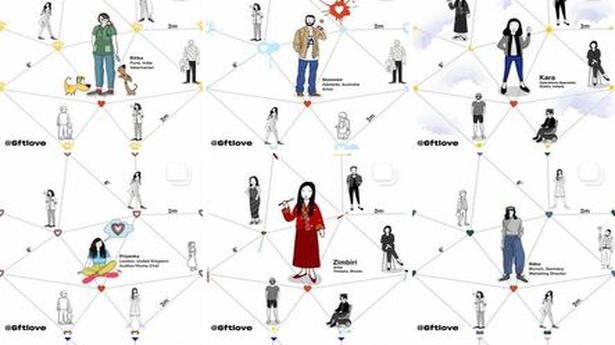 For 6ftlove, the Instagram Grid takes on a far more literal sense. Intersecting traces run like tracks throughout this web page, joined by little pink hearts. And the constructing block models of this hive are illustrations of individuals such as you and I, all bodily distancing.

“6ftlove is both a design project and a global solidarity movement to fight the spread of COVID-19,” says Sabah. The group invitations individuals to ship of their experiences of isolation, submitted in any language. Almost on daily basis, they profile a person’s story, with an illustration and a quote of how they’re navigating the outbreak and coping with bodily distancing.

“We are gathering stories spanning a diversity of experiences, backgrounds, and geographies. We include quotes in their original language alongside an English translation,” provides Sabah.

And it’s working: the tales put up have are available from 17 international locations and 34 cities, in seven totally different languages to date. Some of them are docs and home staff, whereas others are comedians and writers.

A 12-year-old talks about celebrating her birthday beneath lockdown, whereas a former graffiti artist from Adelaide, Australia, who has now taken to canvasses, is itching to color the city once more. “I am reminded of where my love for art came from,” he says.

The illustrations within the grid are by Diana Ang and Aashti Miller, and the group contains city planners (Sera Tolgay, Akemi Sato), designers (Mira Khandpur, Nikita Notowidigdo), and an environmental knowledgeable (Daphne Yin) — some based mostly within the US and a few in India.

“I started 6ftlove in early March, just as the COVID-19 pandemic swept through the world. It was at this time that the term ‘physical distancing’ (aka social distancing) came to dominate the discourse,” says Sabah. “I felt that there was a need to spread the message that practising physical distancing doesn’t mean we can’t be social or connect with people – whether it be loved ones or strangers.”

Living in New York City, which emerged as one the epicenters of this disaster, Sabah was fearful about her father. “He is in his late sixties, has diabetes, and is in the high-risk category. I tried to convince him to stay at home.” Despite her dad and mom residing in the identical metropolis as her, she hasn’t seen them in particular person in over two months. “I mostly keep in touch with my family and friends via video calls and texting, which means my phone has basically become an extension of my arm,” she says.

But as cities world wide are easing restrictions within the coming weeks, Sabah plans to carry the motion from social-media to actual life.

“We are working on a campaign to mainstream the need for collective action to combat the spread of COVID-19 and remove the psychological barriers to physical distancing. This will include a design for a wearable pin that communicates to others that even though you are keeping a safe distance, you are doing it out of love and concern for them.”

Meanwhile, the group is focussing on hard-to-reach tales, from susceptible teams, rural populations, and frontline staff. “We would also like to partner with organisations with aligned goals to reach out to communities who may not have access to social media,” she says.