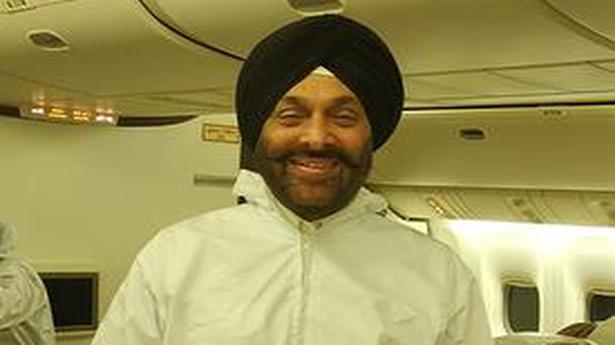 When Prime Minister Narendra Modi applauded the efforts of Capt. Swati Rawal and Capt. Raja Chauhan of Air India Boeing 777 that airlifted 263 Indians, largely college students stranded in Rome, it was an appreciation to cherish for the crew of that historic flight on March 22. Among these engaged within the operation was senior purser Sukhvinder Singh, former Delhi and Assam left-arm spinner.

The 20-member cabin crew reported on the Indira Gandhi International Airport on March 21 to carry out, maybe, crucial task of their careers. Flying to Rome with 120 Italian nationals and returning with Indian college students, was the “call of the nation” for each crew member.

Having been employed with Air India (previously Indian Airlines), for shut to 30 years, Sukhvinder is among the many few sportspersons who didn’t relaxation on the on-field laurels.

“Cricket was the driving force for me to take up challenges in life. This was a mission for us. We were going to bring back the youth, the future of India. It was a once-in-a-lifetime opportunity to serve the country,” stated the 53-year-old.

Rising to the event

“Air India has been doing a fantastic job in these times of crisis. It flew our countrymen from Wuhan and Milan. We take pride in being a part of that family. Each crew member knew it was the need of the hour. We understood the gravity of the situation and grabbed the chance when it came our way,” stated Sukhvinder, recalling the expertise.

“We have been supplied with all of the safety (Hazmat swimsuit) from the COVID-19 virus. I used to be not scared. Being a cricketer, I’ve confronted many challenges and stress. I’ve flown with many Heads of States, however this was distinctive.

“I was part of a historic exercise that was evacuating our young citizens trapped in a foreign land. When we landed, most of them shed tears of joy and relief,” stated Sukhvinder, his voice choked with emotion.