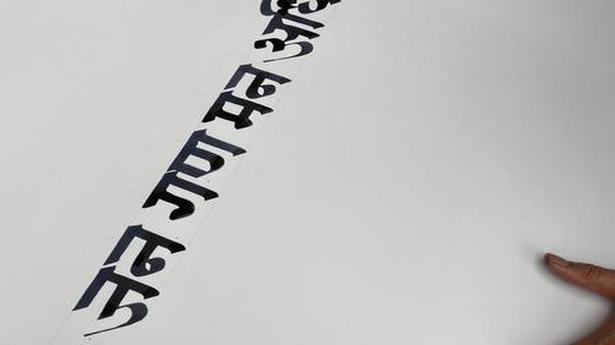 When the nation turns 74 on August 15, calligraphers from throughout the nation are coming together to celebrate the linguistic richness of India. ‘Akshar Bharat’, a digital occasion conceptualised by National Award-winning calligrapher Achyut Palav, honours the National Anthem by totally different scripts of the nation.

“In 2016, I had done a project, ‘Jan Gan Man’, where I inscribed the National Anthem on a large canvas in Devanagari script. This year I wanted to feature regional scripts as well, thus making it a festival of letters. You get to see the beauty and magnificence of each script,” Achyut says.

‘Akshar Bharat’ brings together 15 scripts, 15 calligraphers and 15 vocalists. As the National Anthem is rendered, the calligraphers will showcase the strains in several scripts. The video shall be launched on August 14.

Achyut Palav will write in Devanagari script and Prabhsimar Kaur in Gurumukhi. While Ketak Gaidhani will put down a line in Modi script, an historical variation of the Devanagari used from the 15th to the 17th century, Rupali Thombare will pen a line in Maithili, an Indo-Aryan language spoken in Bihar and Jharkhand. Siddham script, as soon as used to write Sanskrit, shall be utilized by Avdhut Vidhate.

“It feels good that calligraphy is being highlighted on such a momentous occasion. I have written the line ‘Thava shubha naame jaage’ for the initiative,” says veteran Malayalam calligrapher Narayana Bhattathiri (Artist Bhattathiri).

This is a three way partnership of MIT University, Pune, and Achyut Palav School of Calligraphy. Adinath Mangeshkar, son of Hridyanath Mangeshkar and secretary common of MIT Viswashanti Sangit Kala Academy (MITVSKA) has composed music for the video. The 15 vocalists are from MITVSKA.

“When the country is going through hard times, we calligraphers are doing our bit to keep people motivated and instil patriotism,” he provides.